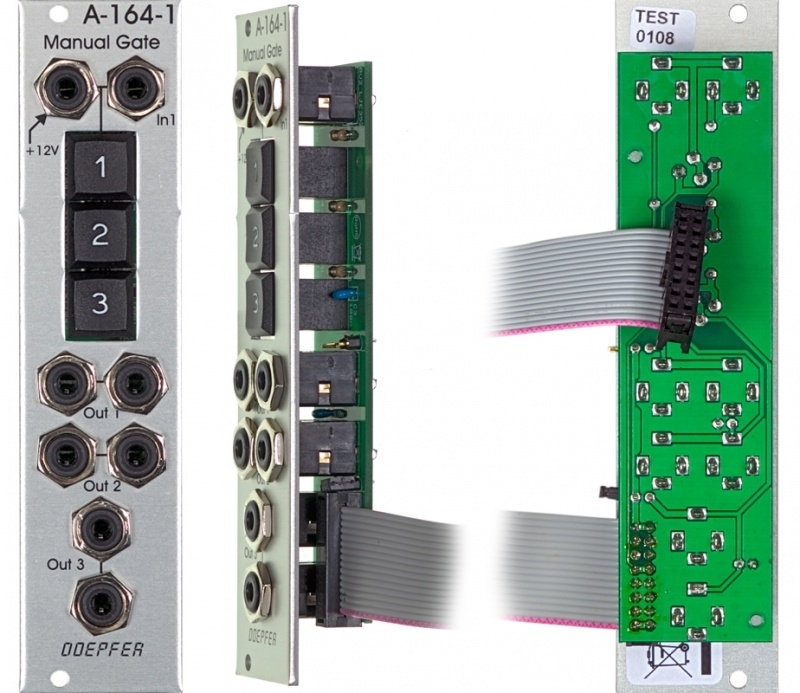 Module A-164-1 is equipped with 3 push buttons that are used to generate three separate manual gate signals (i.e. ~ +12V voltage output while button is operated, 0V when released). The gate number (1, 2, 3) is milled into the caps and white inked. Gate 1 is a bit different: provided that no plug is connected to the input socket it behaves like the other two manual gates (the socket is normalled to +12V via a protection resistor). If a control signal (e.g. rectangle output of an LFO) is fed into the input socket the gate button 1 is working as a momentary on/off switch that is used to turn the signal on/off that appears at the two output sockets (kind of mute function). Each Gate output has two sockets available (miniature multiple).

Internal jumpers can be used to connect Gate 1 or Gate 3 to the gate line of the internal A-100 bus. That way the module can be used to control one or more envelope generators (e.g. ADSR A-140) that are connected to the same bus board as the A-164. The gate outputs are "smoothed" with 100nF capacitors to avoid contact bouncing. If Gate unit 1 is used to switch audio signals this capacitor should be removed as it works as a low pass filter for audio signals.

Attention: The module comes with a jumper installed to JP2 (i,e. Gate 3 is connected to the A-100 bus). The jumper has to be removed if e.g. an A-190 is already connected to the Gate line of the same bus board!  If the A-164-1 should be used as Gate source for the A-100 bus the connection of any other Gate source (e.g. A-190) has to be removed. Otherwise a short circuit is made between the outputs of the Gate transmitters !