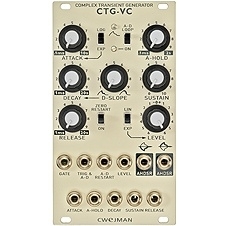 Order on request. There is no stock at this moment. Please ask for availablity of a specific module, because of long waiting lists. Delivery times can be several months or much more. Please do not order, but contact us first!

The envelope generator provide control voltages that can be used for dynamic change of all voltage controlled parameters, such as; frequency, amplitude, pulse width, cutoff.

The most common use is controlling filters cutoff frequency and a voltage controlled amplifiers amplitude in order to achieve dynamic timbre- and level-changes.

The CTG-VC is a complex transient generator with a lot of features, such as; two different shapes for the attack, attack hold (A-HOLD) for punchier sound than a standard attack, variable decay slope (D-SLOPE) from natural exponential to heavy logarithmic, attack-decay loop (A-D LOOP) and polarized level for outgoing transient signals which means that both outputs levels are controllable in both directions (positive and negative).

The external signal alone in the A-D RESTART input starts a single A-D transient for every new external signal A-D RESTART period (every shape). The SUSTAIN LEVEL should be in pos. 0. ZERO RESTART resets (when ON) the remaining release voltage for new gate signals so attack starts always from 0. 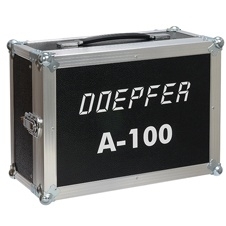