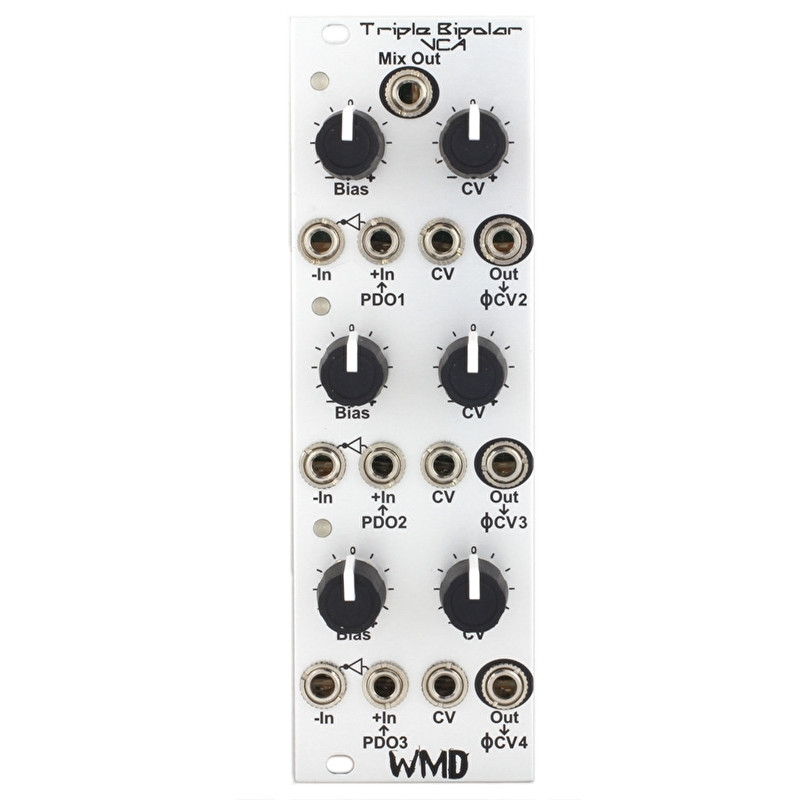 Intoducing the WMD Triple Bipolar VCA, the input side expansion for our Phase Displacement Oscillator. This module provides dedicated inverting/polarizing/bipolar amplitude modulating inputs normaled to the Phase Modulation inputs on the PDO.

The Triple Bipolar VCA is also designed to be used as a standalone module, it does not require the PDO to operate.

+ In - This is the normal input for each VCA channel. It drives the inverting side of the Bipolar VCA. These inputs are normaled from outputs on the PDO.

- In - This is the second input for the VCA channel. Normaled through this jack is the inverted signal from the + Input. Plugging in here converts the channel from a Bipolar VCA to a dual VCA. Negative control voltages will open the - side, and positive control voltages will open the + side. This allows you to use two modulation sources and alternate between them, while still retaining control over amplitude.

CV - This input jack drives the CV knob. It can handle unipolar or bipolar signals.

Out - This is the output of each VCA channel. They are normaled to the Phase Modulation inputs on the PDO.

Bias Knob - Sets the manual gain for the VCA. Centered will have a zero output (with 0V control voltage).

CV Knob - This knob is a bipolar attenuator for the signal applied to the CV jack. Spin clockwise from center for positive CV interactions, counterclockwise to invert the CV.

Mix Out - This output jack mixes the signals from each VCA.

The Triple Bipolar VCA is 8HP.

The depth from the back of the panel is roughly 25mm.