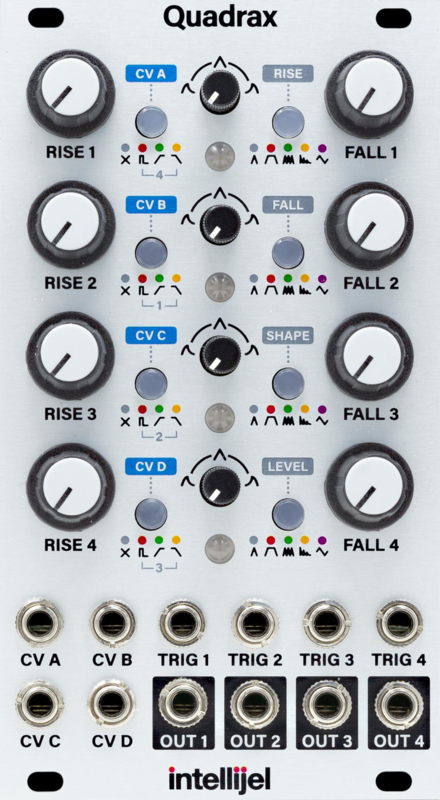 The beating heart of your modular.

Whether you are exploring the unique channel functions, CV modulation matrix or chaining options, it is quickly apparent that there are infinite possibilities to explore. This powerful and tactile modulation generator will quickly become the beating heart of your modular system.

The Intellijel Quadrax consists of four independent, CV-controllable channels, each of which can be configured to perform any one of the following functions:

The envelopes all feature a continuously variable response curve, ranging from logarithmic through linear to exponential, and each stage can be as snappy as 0.3 ms to as lengthy as 20 seconds.

When set to Burst mode, the channel generates a rising or falling burst of pulses, with full control over the length of the pulse burst, the number and shape of the bursts within it, and whether the bursts increase or decrease in amplitude over the burst.

AD, AHR, Cycling and Burst modes all feature a user-selectable maximum output level of either 5V or 10V.

LFO mode offers control over the frequency and waveshape, while providing a unique morphing feature that creates numerous variations of the selected waveshape. LFOs can be either free-running or beat-synchronized using the channel’s TRIG input.

Channels can be chained together to create complex multi-stage envelopes, with each channel triggered by the previous channel’s trigger input, end-of-rise, or end-of-fall. This enables multiple function generators to fire simultaneously, or it enables the creation of complex multi-stage envelopes by allowing the linked function to fire either at the end of the previous function’s rise time, or at the end of its fall time.

Four freely-assignable, step-attenuverted CV inputs are capable of modulating any or all of the various parameters across all four channels using the built-in CV matrix, and built-in attenuversion for each assignment.

Quadrax remembers its current state (Mode and CV assignments, channel links, etc) and retains that state even if power is removed, meaning Quadrax will always turn on in exactly the same state as you last left it.

Use the optional Qx module to add individual outputs for each channel’s End-of-Rise and End-of-Fall triggers.