"The modDemix will return to stock with subtle changes that make the module more intuitive and more useful. The faceplate graphics more clearly indicate the signal flow and parameter functionality. The sound of the modDemix has not been changed in any way.

The internal normalizations to the Carrier/ CV Inputs from the original modDemix (CH. 1 Carrier IN Normalled to CH. 2 Carrier IN, CH. 2 Carrier IN normalled to Ch. 2 Signal IN) have been exchanged for more the easier to understand and more widely useful Combo Knob functionality. The normalization of CH. 2 Signal IN to CH. 1 Signal OUT remains. This means the modDemix functionality is now identical to that of the Optomix (excluding the Damp controls). The Strength knob will function like the CONTROL knob on the Optomix. With nothing patched to the Carrier/ CV IN the Strength Knob will set the amplitude of the signal. This means the modDemix will easily work as a mixer. Previously users had to patch a +5V offset from MATHS to CH. 2 Carrier/ CV IN in order to achieve this functionality. As an audio mixer the modDmix will be very colored, sounding more aggressive then the Optomix. As a control voltage mixer, it will have a faster and more linear response then the Optomix. The circuit is identical to the original aside from the change to the normalization scheme. The old normalization scheme could be easily patched with just a couple of cables, and we will include a patch tip in the new revision manual that explains just how to do it. "

The modDemix features 2 identical direct-coupled balanced modulator circuits that may be used together or independently to process audio or control signals by means Ring Modulation, Multiplication, Voltage Controlled Polarization/ Amplification/ Mixing and more. 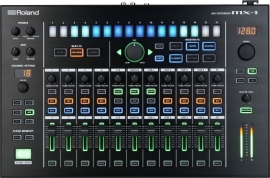