Tall Dog Electronics is located in the Pioneer Valley region of Western Massachusetts. Tall Dog has primarily focused on producing a variety of breakout boards for the Teensy microprocessor development platform and conducts the majority of its business via the Tindie marketplace. µBraids SE  and  other re-engineered modules of Mutable Instruments like Clouds and Rings represents their most ambitious project to date.

Michael Gilbert is a composer, recording artist, and teacher of electronic music, for over 40 years. His music is a creative mix of electronic, jazz, world, and contemporary classical idioms, and is available on 9 albums of original work as Michael William Gilbert. The music has featured Adam Holzman, Mark Walker, Peter Kaukonen, David Moss, and Tony Vacca. He has also designed and built electronic music equipment, using it in his own studio and making it available to other musicians.

Daniel Gilbert is a designer and engineer with a background in film, photography, and animation. After graduating from Hampshire College he spent the next several years working in the Los Angeles film industry. He now resides in Easthampton, Massachusetts. 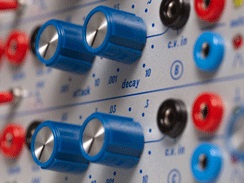