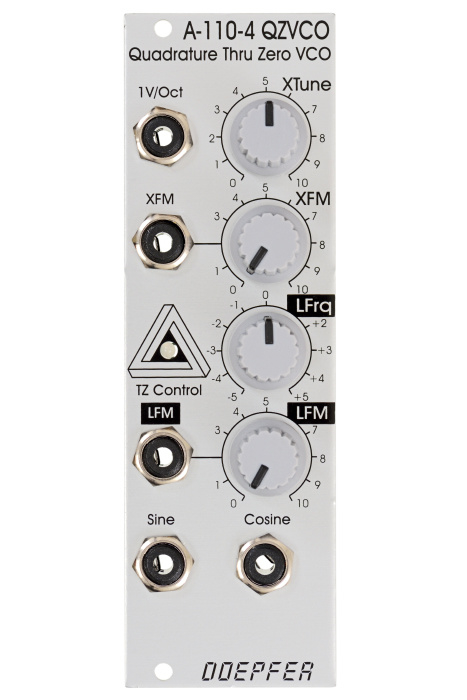 A-110-4 is a so-called Thru Zero Quadrature VCO. The term "quadrature" means in this connection that the oscillator outputs sine and cosine waveforms simultaneously. The term "Thru-Zero" means that even "negative" frequencies are generated. But this a bit a misleading term as negative frequencies do not really exist. "Negative" means in this connection simply that the sine/cosine waves will stop when the linear control voltage reaches 0V and continue with the opposite direction as the linear control voltage becomes negative and vice versa.

The module has two control sections: linear and a exponential. The exponential section consists of the XTune control, the 1V/Oct input and the XFM input with the corresponding attenuator XFM. The exponential control voltage is the sum of these three voltages. The linear section consists of the LTune control and the LFM input with the corresponding attenuator LFM. The linear control voltage is the sum of these two voltages. A dual color LED is used to display the polarity of the linear control voltage (green = positive, red = negative). The resultion pitch of the sine/cosine outputs is determined by the resulting control voltages of both sections. The linear section is used to control the pitch in a linear manner. When the LTune control (LTune means Linear Tune) is fully CW the module works like a normal Quadrature VCO (e.g. like the A-143-9) and the LED lights green. The pitch is then controlled by the exponential section with the manual Tune control and the exponential frequency control inputs 1V/Oct and XFM. 1V/Oct is used to control the pitch by a 1V/Oct CV source (e.g. sequencer or Midi/USB-to-CV interface). XFM is used to apply an exponential frequency modulation with adjustable depth (e.g. from an LFO or another VCO). As the LTune control is turned counterclockwise starting from the fully CW position the frequency is lowered in a linear manner until the sine/cosine waves stop near the center position of LTune (provided that no LFM signal is present). As the LTune control is moved from the center towards the CCW position the waves start again but into reverse direction and the LED turns red. When the fully CCW position of LTune is reached the module works again like a normal Quadrature VCO. But much more exciting is the usage of the LFM input to modify the linear control voltage by an external control voltage (typically another VCO). Linear modulation by another oscillator using the thru zero feature generates audio spectra than cannot be obtained from an oscillator without the thru zero function. The reason is that a "normal" VCO will simply stop as the linear control voltage becomes zero or negative. But a thru zero VCO will start again with "negative" frequencies as the the linear control voltage becomes negative.

The main advantage of the A-110-4 compared to other Thru Zero VCOs is that the design used a sine/cosine core. The sine/cosine waves are not derived from other waveforms (e.g. sawtooth or triangle) by means of waveshaping. Rather the sine and cosine waves are the core of the VCO which results in very pure waves with a minimum of distortion and overtones. 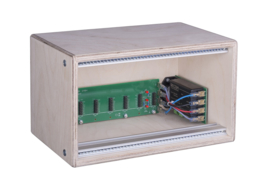