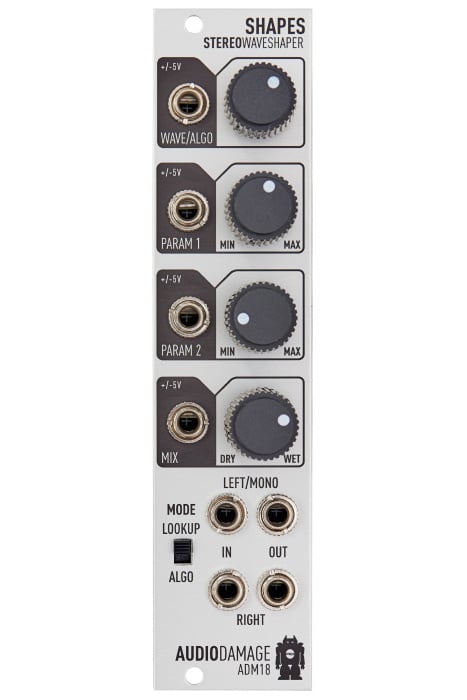 Shapes will shape any source, from a simple sine or triangle oscillator on up to full stereo program material. From turning a sine in to a simple square or saw on up to full Nine Inch Nails / Merzbow level destruction, Shapes adds hugely to the sonic palette of your Eurorack modular synthesizer.

The PARAM 2 knob, in LOOKUP mode, controls the start position of the table. It can effectively be thought of as a phase control. In ALGO mode, its function varies, and it is not used in every algorithm.

The MODE switch controls whether the module acts as a wavetable scanner or a waveshaper. In LOOKUP mode, the wavetables are active, while in ALGO mode, the algorithms are active.

Shapes is true stereo; the left and right signals do not intermingle internally; thus you can, for instance, run a kick in the left channel and a snare in the right, and vary the effect by attenuating either channel before it enters the module