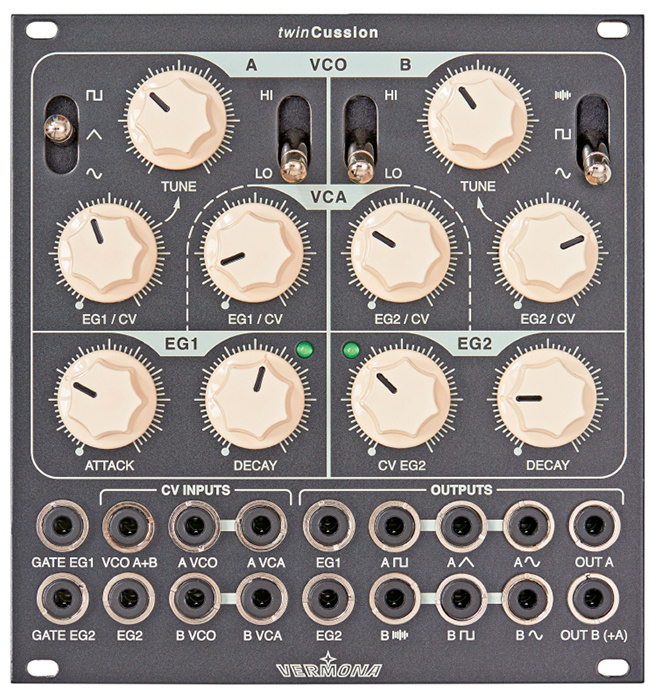 A duophonic percussion/drum module which offers you two individual, almost identical voices. Each of them has an oscillator with selectable waveforms as well as an attack-decay envelope which simultaneously can modulate the pitch and the VCA.
A large number of sockets is available which not only are used for modulating and triggering the drums but also emit any oscillator waveform and envelopes. That is utterly useful!

The first difference between both voices are the available waveforms: voice A offers square, triangle and sine, while voice B has noise, square and sine. For atonal noisy sounds like hi hats and anything cymbal voice B is more suitable.
The wave forms are switch selectable and simultaneosuly available at individual outputs i.e. you can process the audio signals exernally. Using the module's EG CV outputs plus two external VCAs you can re-create or alter the signal flow. Envelope signals and audio sources are available!

For controlling the frequency there's a hi/lo switch alternating between bass and treble, then a tune control and a modulation attenuator which scales either the envelope or a nexternal CV. besides individual inputs (A VCO and B VCO) there's also a common CV input VCO A+B which addresses both voices simultaneosuly. A VCO is normalized to the VC CV input A VCA, analogical for channel B.

The second difference is in the envelopes. Voice A has an attack-decay envelope generator with manually adjustable times. Voice B has a decay envelope with fixes attack time but with voltage control of decay time via EG 2 input and the CV EG2 attenuator.
The envelope generators are able to modulate not only the pitch but simultaneously also the level. For that reason there's an second attenuator which altternately detemines the intensity of an external CV (see above).

Each voice has an individual audio output, although OUT B works as a mix output when no cable is plugged to OUT A.