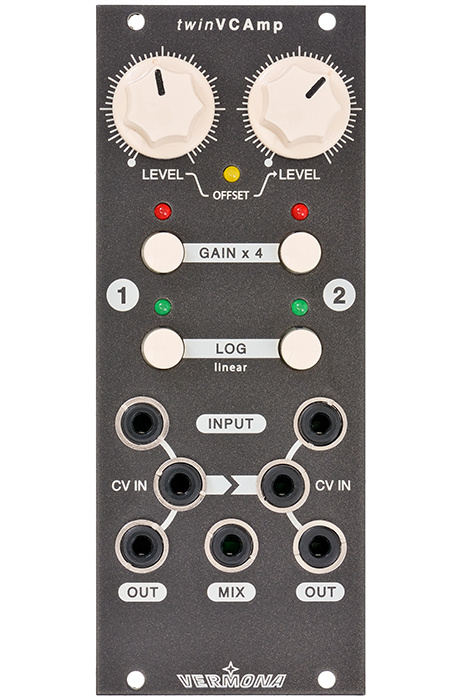 The Vermona twinVCAmp is a highly versatile dual VCA/2-in-1mixer, that not only offers different response curves for both VCAs - compared to most of the available VCA modules today it also offers real amplification instead of just attenuation.

The twinVCAmp is an outmost versatile and high grade dual VCA. Its luxurious configuration and thought-out internal connection make it a valuable tool for every modular synthesizer.
For each VCA, the amplification-ratio can be switched from exactly 1:1 to 1:4. This allows useful uplifting of weak input signals. At the same time, audio signals with high input level will be harmonically saturated and compressed.
The response curves of both VCAs can be independently switched from linear to semi-logarithmic - a curve specially adapted to musical audio signals.
Both VCAs can be used independently or in combination:
- VCA1 may serve as offset-generator for VCA2
- both VCAs can share the same control voltage
- the summed output of both VCAs will be output separately

twinVCAmp is more than just two VCAs in a single module: dual- or stereo-VCA, a voltage controlled 2-in–1 mixer, overdrive unit…

Every VERMONA module is carefully produced, checked and packed in Vermonas “elektroakustischer Manufaktur” in Erlbach, Germany. Advanced circuits and the usage of quality components build the foundation for a module of highest usefulness and of long life-time.