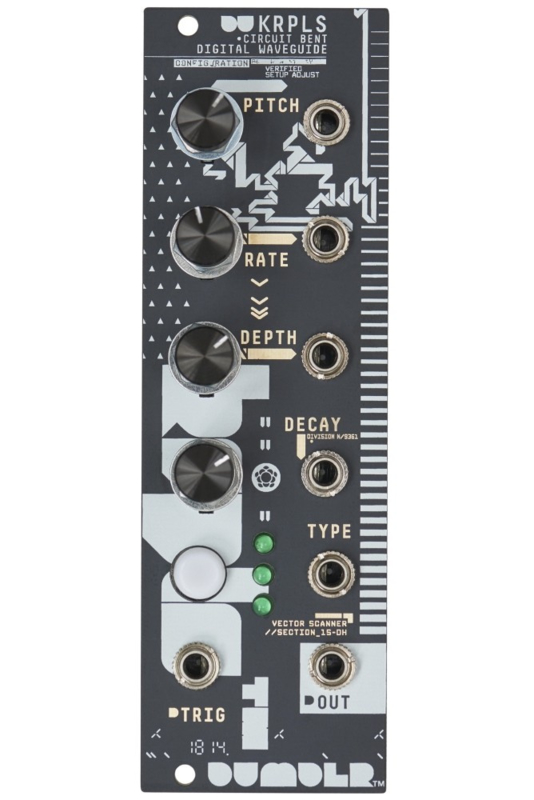 DU-KRPLS is a physical modeling synthesizer voice that simulates the sound of string instruments. It is based on Karplus Strong algorithms. Small errors in the code were added to create results reminiscent of circuit bending. Compared to the Karp, this module is even more glitchy and unpredictable.

First of all, the hard facts: DU-KRPLS generates sound based on Karplus-Strong algorithms. There are four parameters which can be controlled viapotentiometers and CVs. If the control voltage inputs are used, the knobs function as attenuators. A trigger input excites the module. Results are emitted via an audio output. Additionally, you will find a button with a jack nearby. More on this later.

The Karplus-Strong algorithm was patented in 1983. It is used to simulate the sound of string instruments. - A type of physical modeling. The DU-KRPLS uses this basic principle, but adds small errors to the algorithm in order to create sounds reminiscent of circuit bending. Playing with the DU-KRPLS can be quite intense, loud and above all beautifully unpredictable.

About the four parameters that form the sound: Pitch sets the fundamental frequency of the oscillation. Rate and Depth are responsible for frequency modulation, Decay determines the length of the generated sounds. Due to the intentionally faulty algorithms, the results of turning the decay potentiometer is not always exactly predictable. A tip from the manufacturer: Most of the time, you will leave the decay parameter set to either maximum or minimum value. Depth and rate determine the intensity and frequency of the internal modulation, the waveform for this is selected via the already mentioned button. Three different waveforms are available, which can also be selected via the trigger input called Type.

Another tip from Meng Qi: If you want to play the DU-KRPLS on the pentatonic  5-tone scale, you can press and hold the button when starting the module. The generated notes are then quantized to the Pentatonic D major scale.

There is a second version of this module, for all who like it a little more tame: Karp