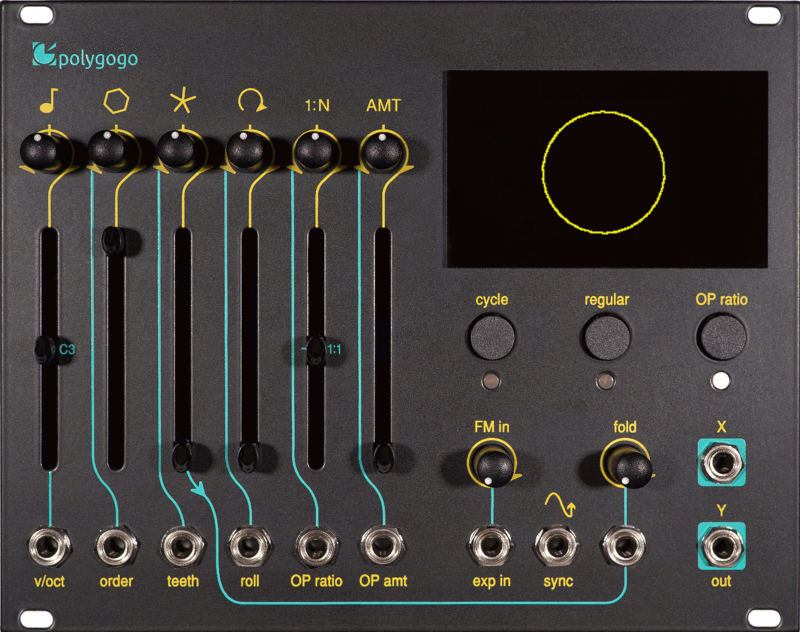 E-RM’s polygogo is the first digital stereo oscillator to feature the brand-new Polygonal Synthesis technique. Based on complex two-dimensional amplitude shaping of sine waves, the polygogo is a performance-oriented, high-quality instrument which allows you to explore fascinating sounds and shapes alike. Thanks to the combination of Polygonal Synthesis, two internal modulation sources and a fully-analog overflow stage, the module is capable of generating an extremely wide array of animated spectra, ranging from lush drones, massive basses and even sounds reminiscent of acoustic instruments.

The polygogo from E-RM is a digital stereo oscillator using the newly developed Polygonal Synthesis technique. It is based on a complex two-dimensional amplitude shaping of sine waves.

The oscillator can be played tonally thanks to the 1v/oct Input.

Its “single knob – single function” interface makes the polygogo not only a terrific live performance synthesizer, but a great tool for meticulous sound design as well. – No menus involved. You’d like some visuals that match your creative sound explorations? – The polygogo can deliver! Just connect its X and Y outputs to a laser system, X/Y plotting visualizer or video modular and enjoy some intriguing, constantly moving and transforming shapes on an external screen.

Polygonal Synthesis is heavily centered around the interaction between user and the polygonal object behind the OLED screen. Based on the number of vertices (Order) and their displacement (Teeth), the fundamental tone and the harmonic ratio are created. Rotational modulation (Roll) pans the sound in the stereo field or acts as a vibrato. The internal linear FM operator (OP ratio / OP amt) can modulate the fundamental frequency and its high spectral content. An analog overflow stage at the output (Fold) is able to act as a wave crusher. – Thus, it gives sounds the finishing touch right in front of the output (X/Y).

All main parameters are accessible via sliders. For fine-tuning and to give sounds some additional tweaks, potentiometers were added. Control voltages can be used to modulate each and every parameter. With a cable plugged into one of the CV inputs, the corresponding potentiometer turns into an attenuator respectively attenuverter. Push buttons allow you to choose between three modes of operation. In detail, there are "Infinite Cycling", "quantized Order" and "OP ratio". Last but not least, a hard sync input is available.

The polygogo Eurorack module is sold out and will be available  again end of march.